THE GIRLS FROM ALCYONE

Sigrid and Suko are two girls from the impoverished and crime-infested streets of 24th century Earth. Sold into slavery to save their families from financial ruin, the girls are forced to live out their lives in service to the Kimura Corporation, a prestigious mercenary clan with a lineage stretching back long before the formation of the Federated Corporations.

Known only to Kimura, the two girls share a startling secret—a rare genetic structure not found in tens of millions of other girls.

But when their secret becomes known, Sigrid and Suko quickly find themselves at the center of a struggle for power. Now, hunted by men who would seek to control them, Sigrid and Suko are forced to fight for their own survival, and for the freedom of the girls from Alcyone. 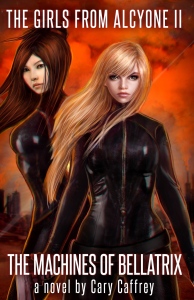 THE MACHINES OF BELLATRIX

The Girls from Alcyone II

Alcyone is gone. The Independent stronghold on Scorpii is destroyed. Sigrid and her sisters have fled the Federation to make a new home on the remote world of Medea.

But with a price on her head the size of a planet, and pursued across the galaxy by the Council for Trade and Finance, Sigrid knows she and her sisters are far from safe. As long as there are those who would seek to control them, hunt them, dominate them, they will never be safe.

Unless Sigrid can stop them first.

But to stop them, Sigrid must first find them. But how? And where? Her only clue is a mysterious coded message; one that could serve as either warning or invitation; one that will lead Sigrid to a factory world at the very edge of Federation space, and to a deadly confrontation with her most dangerous enemy yet: the machines of Bellatrix.

The Girls from Alcyone III

Six years have passed since the events of Bellatrix, and for six years Sigrid Novak has been gone, vanished, with no sign, no word and no trace.

But all has not been quiet within the Federation of Corporate Enterprises. The Council for Trade and Finance has been murdered, assassinated, and the death toll among the Federation’s ruling elite continues to rise.

With every corporate enclave that falls, the legend grows. They call her the Night Witch. A champion to some, a nightmare for others. Wherever she goes, death is soon to follow.

Then, in an abandoned CTF research facility—and after so many years lost—a woman awakens. Her name is Sigrid Novak. And she is very, very angry.

a short story by Cary Caffrey

NOTE: While originally written as a short story, this is chapter two of The Machines of Bellatrix!

SYNOPSIS: Sigrid Novak embarks on an all or nothing mission to secure vital supplies for the girls’ homeworld of New Alcyone.